Academic Cheating Statistics Say There’s Lots of Work to Do

You may have seen dozens of them lately. Cases of contract cheating and the recent college scam with celebs involved are still making the headlines.

Eventually, they may sidetrack your attention. But do they have anything to do with academic cheating in higher school or university? What started once with cheating on exams may turn into the long-lasting habit of cutting corners.

The pressure to obtain better grades lessens the value of academic performance. As an outcome, you have to double the effort in helping students focus on learning itself.

Shortcutting is tempting. But this shouldn’t put all students under suspicion. There is something that inclines them to think that cheating is inevitable.

The statistics collected from recent and most large-scale surveys can reveal how common academic dishonesty is today.

So, let’s cut to the chase.

Academic Dishonesty Surveys in the U.S. and the UK

When it comes to cheating detection, the most comprehensive survey that springs to mind is that of Dr. Donald McCabe and The International Center for Academic Integrity. It had been conducted throughout 12 years (2002-2015) across 24 high schools in the U.S.

More than 70,000 students both graduates and undergraduates took part in it. And the results obtained were jaw-dropping, as 95% of the surveyed students admitted to cheating on a test and homework, or committing plagiarism. 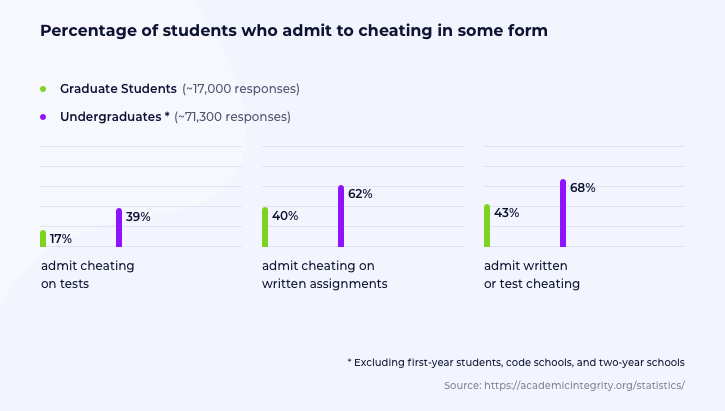 Eric M. Anderman, a renowned Professor and Head of the Department of Educational Studies at the Ohio State University, has also devoted much time to the academic cheating phenomenon. For over 20 years now, he has been examining the why and the how of students’ cheating. In one of the recent studies published in 2017, Anderman surveyed 400 students. Most of them agreed that it’s permissible to cheat in classes they don’t like much.

Another anonymous study carried out by Lindale High School (LHS) provides more up-to-date numbers with 205 students surveyed. 65.7% of them confessed to having cheated at least once, while 85.9% assured they saw other students cheat.

Interestingly, students also shared their perceptions of academic cheating and when it could be acceptable:

For a large part of the LHS students, grades prevailed and justified the choice of the wrong methods. They also admitted that in 44.4% of cases teachers failed to detect cheating.

Thus, Gov.uk released a curious statistic on school and college malpractice registered during GCSE, AS and A level examinations in 2018. Major academic integrity breaches involved unauthorized usage of materials and mobile phones as well as failure to stick to exam board guidelines by instructors. Here are the key findings: 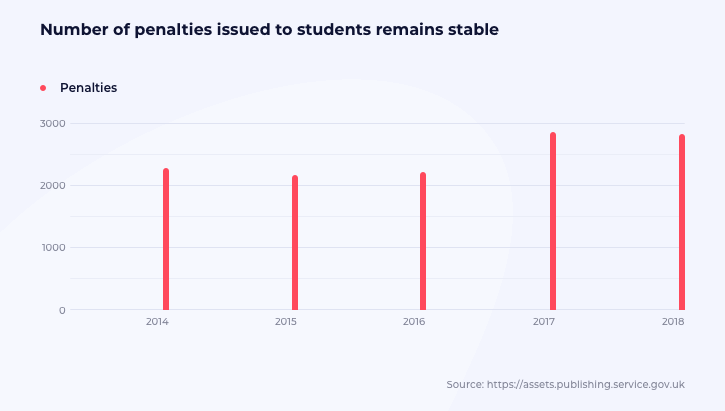 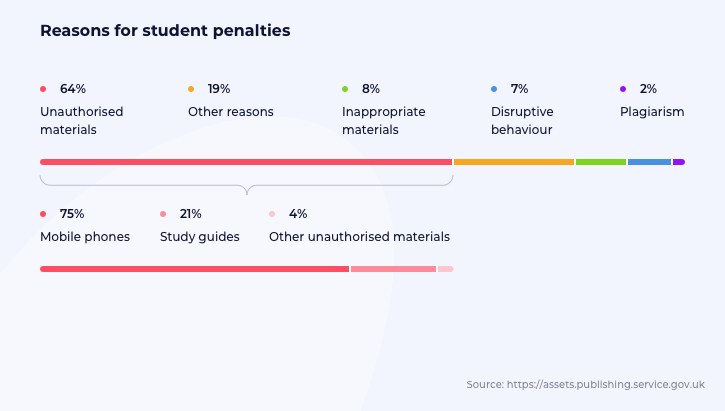 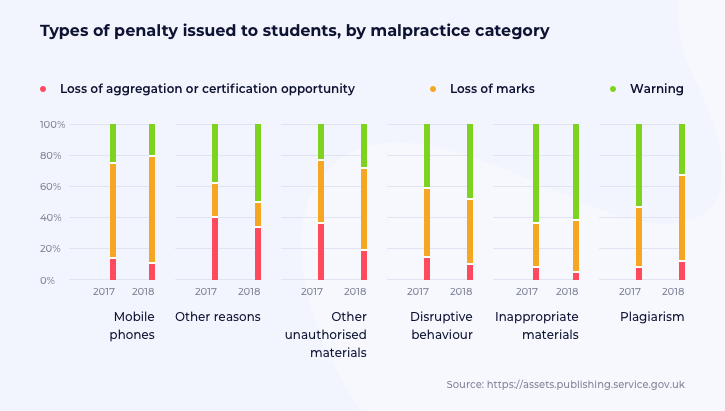 The good thing is plagiarism instances made only 2% of all reported violations, however cheating rates remained unchanged as compared to 2017.

Plagiarism among EFL (English as a Foreign Language) students is another growing concern for Higher Ed. In 2018, Voanews.com (VOA) informed that 85% of plagiarism cases registered at the University of Minnesota stemmed from non-native English speakers.

They often feel more anxiety over grades and test scores, while poor language knowledge causes extra difficulties for them. Consequently, plagiarism among international students is twice the rate of the domestic students.

Renowned Colleges Turn to Be as Fragile

As for popular institutions, there’s a widespread belief that they have more strength to resist cheating attempts. However, the multitude of violations reported proves otherwise.

The research conducted by Donald L. McCabe was mainly based on the data collected from 31 most competitive higher academic institutions in the U.S. He stated that careful exam proctoring and honor codes reduce cheating rates, but they don’t nip it in the bud. What matters the most is student culture within a specific college or university.

Speaking about cheating cases among big names in education, here’s a bunch of the most talked-about:

Harvard’s officials plucked up the courage to take plagiarism allegations out in the open in 2012. Back then, 125 students got plagiarism accusations after collaborating on a take-home exam. The tests had a striking number of similarities that signaled of the unethical actions. Since that time Harvard has been refreshing its academic honesty policies and established Harvard Extension School that encourages open exchange of ideas between faculty and students and guides on how to avoid cheating and plagiarism.

On February 7, 2019, a Yale Daily News survey revealed that 14% out of 1,400 undergraduates confessed having cheated at Yale. 24% admitted copying answers from others, while 26% reported to have seen others cheat. 82% of 191 surveyed students affirmed they hadn’t been caught. What’s the reason? High pressure to perform and intense involvement in extracurriculars. One of the solutions suggested – implementation of a flexible deadline policy.

Stanford University reports cheating incidents every quarter. In 2015, the University

was investigating an extremely high number of cases. 120 students (one in five students enrolled) attending a large introductory course were suspected of breaking the honor code policies. This video explains what pushed students to overstep the boundaries.

May Cheating Hinge On Student Culture?

An ever-growing desire to get good grades seems to be nationwide. You can hardly meet a student who assumes it is something unimportant.

However, different nations have different mindsets. Therefore, cheating origins in the U.S. and Ukraine are quite unlike. The research conducted by CEDOS and American Councils for International Education in 2016 said that Ukrainian students cheat way more frequently than their American peers. 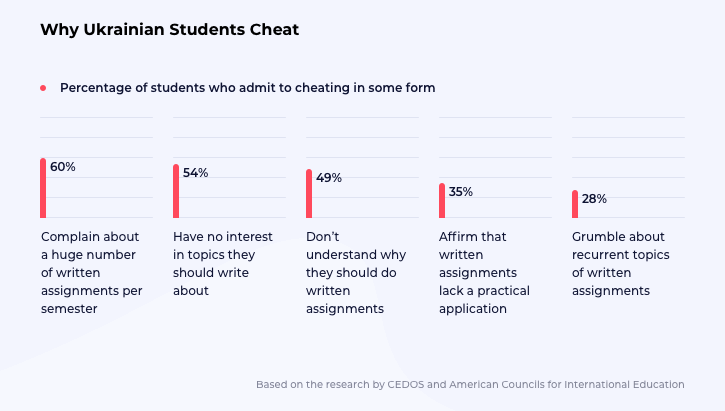 Students in Ukraine are less motivated to avoid cheating and plagiarism. They’re often hesitant about their future career paths and don’t see the purpose in completing all those written assignments. What is more, many Ukrainian institutions miss out on explaining why academic integrity is so crucial.

For American students, academic integrity breach is usually explained by “pressure to succeed”, since their overall academic success largely depends on written assignments they submit. In contrast, most of Ukrainian peers don’t feel their future is determined by the successful completion of written assignments.

That is, when students choose to graduate from an institution located in countries with a higher level of academic integrity, they usually face a lot more tension to get through college.

No wonder that news is still reporting an avalanche of cheating incidents among foreign students.

The Unicheck text plagiarism checker has also analyzed the major reasons and solutions for academic dishonesty. So, be on the lookout for our next publications!

Picky about words as well as blog topics. Carries out research for hours to find reliable references. Enjoys having a billion of browser tabs open. Singer-in-chief who irritates everyone on the team.

Stand With Ukraine: Your Help Is Crucial