Interview with Mykyta Isagulov, Author of Art of Plagiarism

Today, we publish the first part of the conversation with Mykyta Isagulov, author of Art of Plagiarism. In his book, Mykyta explores a plagiarism problem in the arts from antiquity to the neo-modern period, arguing that “copying makes the world of art brighter and more intensified.” This amazing book can help you discover the most prominent cases of copying and adaptation in the arts, and unveil new perspectives on plagiarism and art in general.

Mykyta took some time to share why he wrote the book, its main message, intermediality as a driving force of art evolution, and his personal attitude toward plagiarism. 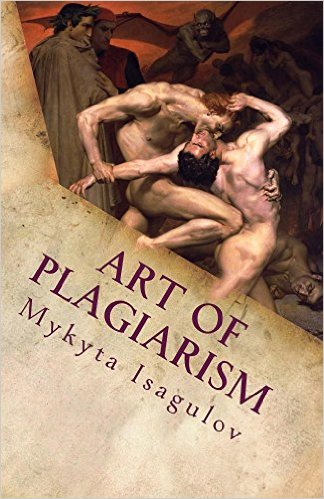 Tell us a little about yourself and your background. How did you become involved with plagiarism in art?

To be honest, plagiarism has never been my major interest until I started my master’s degree studies. All of my annual papers, as well as bachelor’s thesis, were purely linguistic studies, but, actually, words, morphemes, word-combinations, text concepts, semantic cores, grammar exceptions did not interest me greatly. Probably, that was the main reason why I decided to be involved more with literature studies while pursuing the MA degree at the university.

It took me one year to search for samples of plagiarism or copying, to check them again and again, and group them into specific types. Actually, that was the idea of my scientific adviser, to start researching the topic of plagiarism and intermediality in the arts.

Briefly, what led you up to sit down and actually write this book?

Well, I graduated from the university with a first-class degree and had a really nice job. I have always been fond of writing – essays, short stories, novelettes – and I always dreamt of writing a proper book. I gathered a lot of information for my MA thesis and wanted to make a book out of it. It took me another winter to write a draft of the book on plagiarism in arts, edit it, check all the names and dates. I just wanted to share my knowledge and all the information that I’d been gathering for several years together with researchers, art connoisseurs, and other people. You can call it scientific egoism, or willingness to be useful to society.

Please describe what the book is about in one sentence.

Mykyta: Art is everywhere around us, and the number of plots, stories, and topics is limited to a certain extent, and therefore the whole history of arts is the history of plagiarism, subconscious copying, and conscious adaptations of the works of other artists.

Olga: Is there a main message in your book that you hope readers will grasp?

Most writers just write in order to get rid of information and ideas that got stuck in their heads. I have never thought about it in that way. I guess that I just wanted to share the following message with the prospective readership: Everyone can be involved in art, but one should know the specific laws of the world of art.

Such rules and laws should be either followed, or broken – to create the new masterpieces out of all the millions of interpretations and sub-versions developed by the previous generations of artists. Being a master of literature, sculpture, painting, music or any other art is a very hard task. Art hides deep and complicated concepts behind itself, even if one thinks that a piece of art is something simple, he or she might be seriously mistaken. To crack the code, to decipher the message of every artwork a reader, observer or listener has to consolidate a lot of knowledge and think of the epoch when the work was done and know some personal things about the artist-creator.

In your book, you differentiate between intermediality and plagiarism. What is the difference and interrelation between these two notions?

Not so many people know about intermediality. Using the dry scientific definitions, plagiarism is purely a fact of conscious stealing of someone’s work and presenting this work as your own. Plagiarism can and should be punished by international and national laws.

However, the history of the arts does not have that many obvious cases of plagiarism, thus, we can trace the presence of intermediality, which in its form is an artistic phenomenon, a synthesis of arts, fusion of arts, combining arts into one piece of art. Plagiarism is an artistic theft, while intermediality enriches the arts and cannot be punished in judicial terms.

Intermediality, in fact, has various forms and types, thus, for instance, the fact of describing a painting in the literary work is intermediality case (e.g. Oscar Wilde’s The Picture of Dorian Gray, 1890), Michelangelo’s dedication of his poems to his own sculptures and their poetic description belongs to the same phenomenon. The same refers to music-literature, dance-music, painting-theatre and any other combination, when the means of one art are used in the piece belonging to another art. I think in this case any work of art can be analysed in terms of artistic copying or intermedial relations. Such analysis can also bring out some interesting and unexpected results.

According to your book the continual formula for success in the arts is: copy + change the source + unveil something new. Can you comment on this please?

Wow, I did not think that someone would make that kind of conclusion. However, I cannot disagree with the formula. As soon as the artist (inexperienced or renowned master of his art) takes one of the already existing sources, presents the story from a new perspective (using the principles of his age, society, culture, personal beliefs) and unveils something new, it is not necessary for him or her to copy.

The artists only should be looking for the new adaptations of the already existing topics, and believe me, it is not an easy task to take Shakespeare’s Romeo and Juliet, 1591-95 (or I should rather say, Luigi da Porto’s adaptation of an Italian tale, 1530) and rewrite it in such a way, that the new piece of literature overshadows the original source and the established archetype of young lovers. There were artists who actually managed to present the world-known stories in such a way that the new versions and perspectives were of the same brightness and importance as the original sources. Just compare the Ancient Greek myth about Theseus and Ariadne’s thread with Jorge Luis Borges’s The House of Asterion, 1947, or Homer’s Odyssey with Virgil’s Aeneid and James Joyce’s Ulysses, 1922. Out of the three latter works I can hardly choose the best or the most important for the literary art, even though all three are based on the same type of literary character (Odysseus, a wanderer) and use the same travelling topic.

Even though it is a hard task, sometimes it is much easier to partially copy an already existing story, bring something new into it or discover something new in it than just try to write, compose or paint something extraordinarily new over and over again, something that will attract the reader, observer or listener. Alternatively, think about any commercially successful story. As soon as an artist creates an artwork that becomes a bestseller, they will launch the process of copying and adapting the work to other arts – and the franchise will include music, paintings, crafts, novels and fanfics, etc. Remember Winnie-the-Pooh and what happened after Disney purchased the rights on the teddy-bear character? Now various merchandise products based on a primarily literary character and its animated story bring Disney Company up to 5 billion dollars annually! The animated series turned out to be a very successful copying of the story, changing the source and unveiling something new in it.

Stay tuned for the second part of the interview, coming soon!