Being a great educator requires much more than just engaging and teaching your students. Odds are, you’re juggling more than one group of students or several subjects at any given time. You may even spend your spare time on whatever additional requirements are placed on you by the administrators. Those little extras wouldn’t be such a big deal if it weren’t for the already-limited time that educators have to do their jobs properly.

Even if schools provide teachers with powerful tools to help them, juggling too many responsibilities means that teachers won’t have a good time using those tools. Whether it’s a tool for providing students with feedback or checking for plagiarism, the danger here is that it will add to the teachers’ burden instead of easing it.

Take an automated grading app, for instance. Suppose a teacher isn’t fully aware of the app’s functionality. Perhaps they mistakenly select a default grade for an assessment that actually requires manual grading. In that case, the teacher will later spend a lot of extra time and effort in fixing that error; time and effort better spent elsewhere.

The same thing is true with plagiarism detection systems as well. Like with any other tool, using a plagiarism checker for academic papers involves plenty going on in the background. Quite often, you’d find that such tools have overlooked features and settings that could significantly reduce the time teachers spend using them.

You and other educators can benefit greatly from this, so we’re going to tell you everything you need to know.

More Than Just a Similarity Score

When anyone speaks about a check for plagiarism, teachers and students alike immediately think about the similarity score. Teachers refer to the score to determine how original a student’s work is. Students, on the other hand, hold their breath as the score is generated, knowing that the software is the ‘gatekeeper’ that decides if they can submit their work or not.

But how exactly do plagiarism detection algorithms work to produce a similarity index report? Is it set in stone by the developers of the software? Definitely not! They’re actually pretty customizable.

These similarity scores are actually generated according to a few pre-set search parameters. Typically, the administration of a school determines those parameters. In some cases, they’ll empower teachers to adjust those settings to fit the needs of their course.

Some educators might assume that having that ability might make using the plagiarism detection software much harder, but it’s actually the opposite. By adjusting the settings to fit your course, you could speed up the entire evaluation process.

Remember: as educators, we may view those similarity scores as nothing more than numbers. Yet, to a student, getting a high similarity score could impact them severely. In a way, you could say that plagiarism detection algorithms actually have a substantial impact well beyond just producing a similarity score.

Using a plagiarism checker for academic papers is supposed to make evaluations much easier to do. The similarity index report is meant for the teacher to rest assured that the work they’re marking is indeed original. Still, relying too much on a text-matching score can be misleading, which is why educators need to understand what situations may influence that score.

The first example is a situation where the score is caused by self-plagiarism. In some cases, a student may quote a paper that they wrote themselves in the past. Suppose the self-plagiarism feature isn’t enabled on the checker you’re using. That would cause the plagiarism detection system to produce a much higher similarity score, simply because it’s comparing the paper to the student’s own past work.

High scores on a similarity index report are a red flag that something isn’t right. But believe it or not, a score that’s too low could also indicate the same. That’s right! There are situations where students engage in text manipulation in an attempt to beat the plagiarism detection software. As a result, the similarity score may be much lower than usual.

Thankfully, Unicheck has a special algorithm to detect such cases called Modifind. Simply put, the algorithm searches for discrepancies by comparing visible text (the ones you can read on the screen) with the sets of symbols that can be recognized by a data processor. Suppose those two don’t match, then the software identifies possible manipulations and brings it to the teacher’s attention. As you can see, some people are willing to go to extreme lengths to evade your check for plagiarism.

While it’s important to catch any instances of academic dishonesty, the plagiarism detection software you use shouldn’t slow you down. That’s why Unicheck has several other ‘invisible’ or overlooked speed drivers that you can use to your advantage.

Here are some that can be of great help to you:

Modifind – as mentioned earlier, this is a special algorithm that searches for text manipulations that you can’t see on your screen. 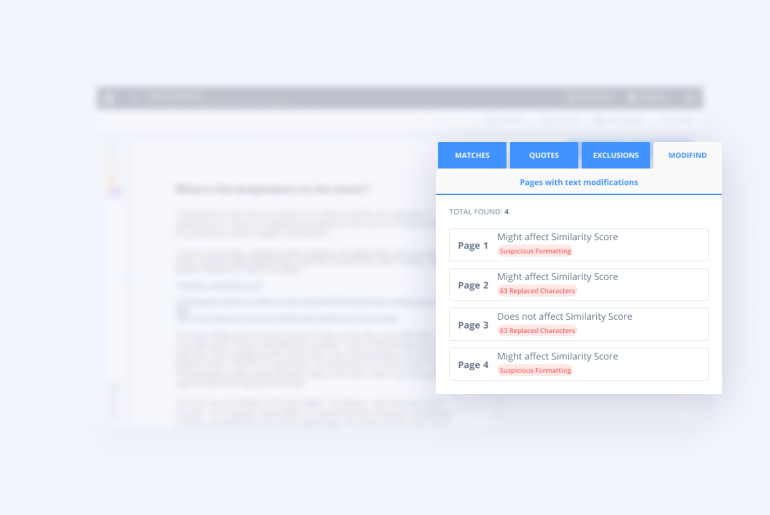 Minimap – a mini overview of text matches, quotes, and references throughout a long document. Clicking on the overview will allow you to jump to the corresponding page. 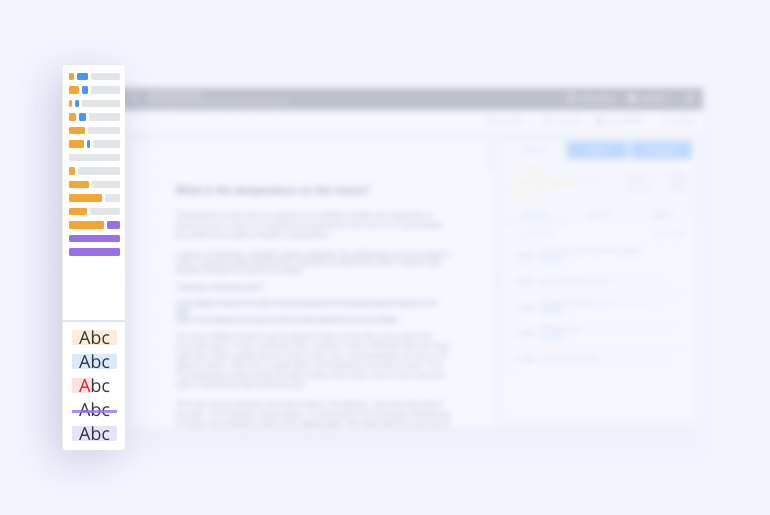 Matches with sources and compare mode – a list of matches and their original sources, and the ability to compare both side-by-side. 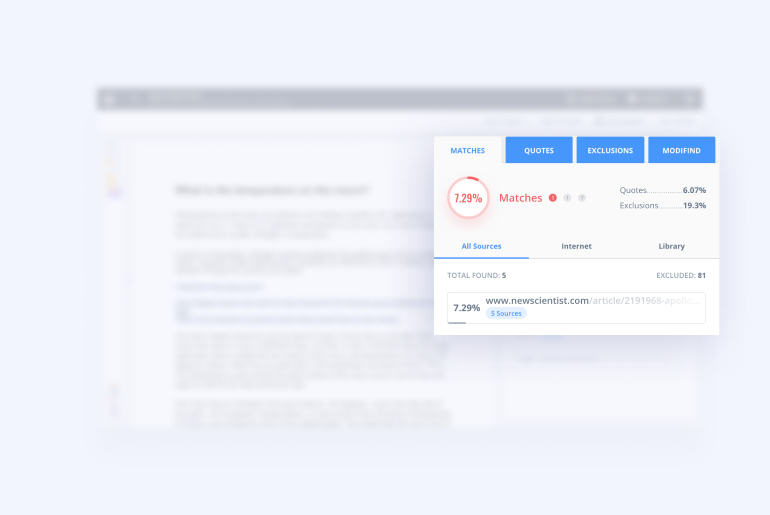 Exclude options – exclude quotes, references or text matches below a certain number of words, so you’ll only see significant matches on the similarity index report. 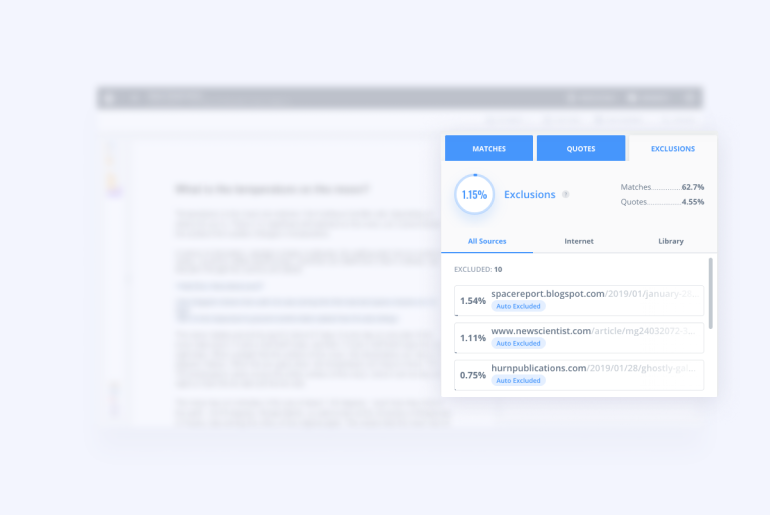 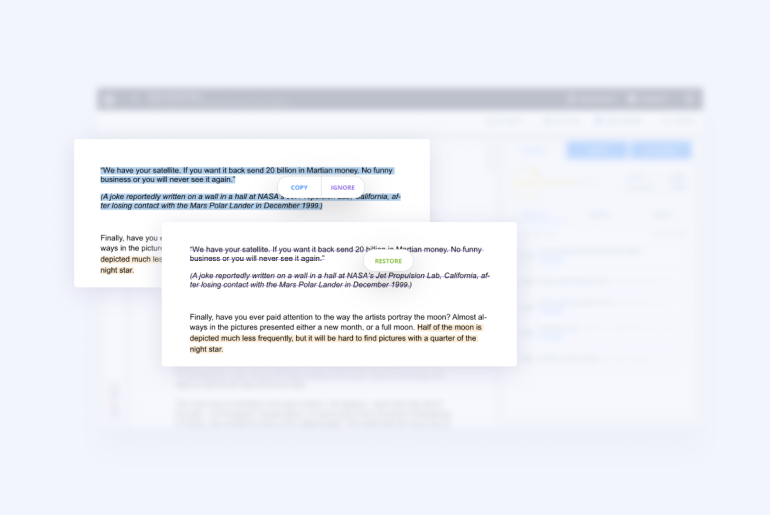 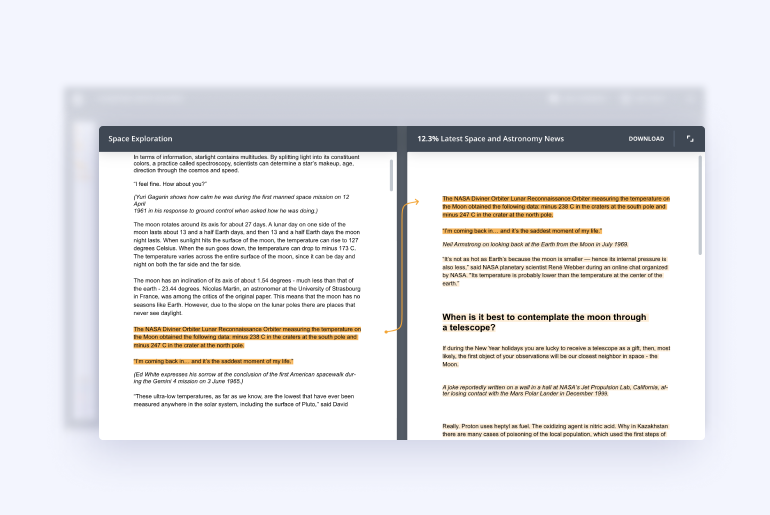 Unicheck is a plagiarism detection software that’s designed to make your work as an educator much easier. To get the most out of it, be sure to learn about all the hidden features you may not be aware of yet. Get useful tips by getting in touch with our Support Team or your dedicated account manager.

Stand With Ukraine: Your Help Is Crucial