Despite the fact that I learned to use a computer before copy and paste was a feature (my parents purchased an Apple II E when I was a kid and I printed out my first papers on a dot matrix), I cannot imagine life without it.

My beloved CTRL X, CTRL V and CTRL C are an essential part of my writing process. For example, I am accustomed to including whatever texts I’m responding to (such as instructions for an assignment or a detailed email) in a working document until I’m finished to minimize errors and misunderstandings.

But, like so many things that were pretty much handed to me without my having to give it much thought, I never really thought about the origins of Cut, Copy, and Paste. Since I first used it on a family computer when we eventually upgraded to a Macintosh desktop, I (wrongly) associate it with Apple. The person most widely credited with Copy and Paste, Larry Tesler, did work for Apple starting in 1980. However, he created the command while working for Xerox Palo Alto Research Center at some point between 1973-1976

He was developing GYPSY, the first document preparation system. 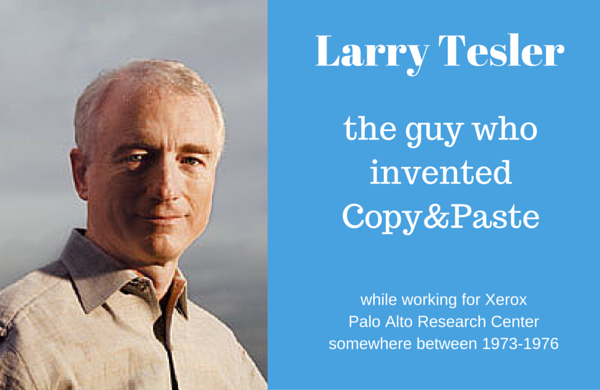 But there is always more to this type of story, right? The concept was inspired by the pre-Computer-Age practice in which manuscript editors literally cut out sections of text (usually with editing scissors) and then paste them onto a new page. Although this method decreased in popularity with the advent of the photocopier, it was still popular enough in the 1980s that the term “cut-and-paste” was a great way to introduce the computer command to its users.

For most early adopters, the earliest they recall using this type of computer system command (being able to duplicate and move sections of text with the cursor) is in WordStar, introduced in 1978, or WordPerfect, a program that enjoyed widespread popularity from the late 70s all the way into the early 2000s.

What’s particularly interesting to me about this origin story is that it’s almost the reverse of the way technology advancements are credited today. Larry Tesler and Tim Mott may have originated the concept of Cut and Paste in Palo Alto in the mid-70s, but it wasn’t popularized until programs like WordPerfect put it into widespread use. Today, the names that are most often used in conjunction with the beginnings of a certain technology are most often tied directly to its success. For example, in perhaps the most popular movie about social technology thus far,  The Social Network, Jesse Eisenberg’s Mark Zuckerberg says to to the Winklevoss Twins: “If you guys were the inventors of Facebook, you’d have invented Facebook,” which feels true in this instance, too (even if it also feels unfair). If having an idea makes you the inventor, than this discussion should start much further back than who founded Facebook; what about MySpace and Friendster?

Right now, Larry Tesler is considered the inventor of Cut and Paste technology in the industry’s very brief history. However, I wonder if time and our preference for crediting those who managed to monetize an invention will eventually supplant his name with the company that first popularized the function with WordPerfect, Satellite Software International (SSI)?